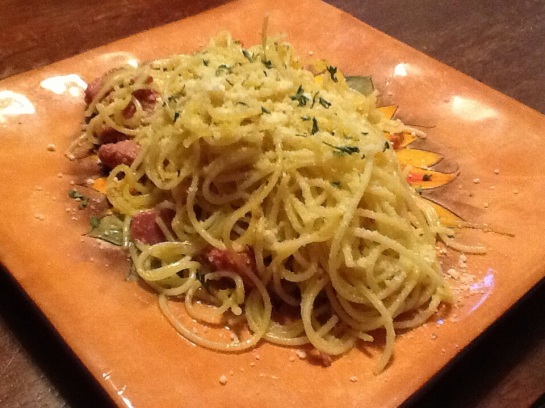 This is one of the simplest and tastiest dishes you’ll ever make.

1. Basically, you’re going to bung the spaghetti, liverwurst, garlic and olive oil in a pan and mix it up. Be gentle doing so as you don’t want to mash up the liverwurst.
2. Stir everything over medium heat, about a minute or two.
3. Garnish with the cheese and parsley.

Because of the natural, but minor, bitterness that liverwurst can sometimes offer, I’d recommend a full bodied red wine or a lightly sweet, but not syrupy, white.

This probably isn’t anything that special or worth writing about but I am going to write about it because this is my blog, after all. Ha ha!

Seriously, though, I just whipped up something that both my wife and I really liked but I’m not sure what I want to call it. Below is a list of names that popped into my head and I’m leaning towards Banagbanag but I am open to suggestions. So. If you have any ideas, leave a comment.

To give you a little idea of how this dish came about and how I came up with the name ideas, here’s what happened: My wife cooked some thin spaghetti and made dinner for herself and our son. I was busy doing something else so I didn’t join them. When I did go to eat, I saw the left over pasta (about a cup or cup and a half’s worth) and pursed my lips to the side of my face. My wife then challenged me to do something with it. So, my culinary mind kicked in and something new and something my wife wants me to make again was created. I doubt that I’m the very first person to throw these ingredients together – thin spaghetti, crushed garlic, extra virgin olive oil, and liverwurst – but, either way, we liked it and, if I had my own restaurant, it’d be making its way onto the menu.

John Rader was my grandfather. He’s been dead for many years and, sadly, I never met him but it’s from his side of the family that I get my German blood. With the liverwurst in my dish, that’s why I’m toying with the names John’s Pasta, The Rader, and SpaghettiWurst. However, and if I can put modesty aside, I got my talent for whipping up tasty eats from random ingredients in my cupboards and fridge from my dad. As a result of that and the German connection courtesy of my grandfather, I’ve come up with the name Fathers’ Pasta; inspiration from my father and my mother’s father. Lastly, there’s Banangbanag and Banny’s Treat. Banagbanag is my dad’s name; his middle name, I think and Banny is the nickname for that and what his cousins call him. In addition to being the spirit behind my ability to cook off the top of my head, my dad also loves liver and liverwurst. Because of health reasons, he enjoys it less than he used to but it was through him that I grew to love liverwurst and pâ·té de foie gras.

So, if you have any name suggestions, let me know. And, moreover if you try it (click here for the recipe), do let me know what you think.

Thanks for stopping by. Mabuting gana!

I recently watched a live cooking demonstration given by a home cook, a retired chiropractor who’s taken to cooking to promote healthy eating. He presented his demo in front of some Health and PE colleagues and to our department head as a precursor to a similar demo that is going to be given to our sixth grade students in the fall. The demo will tie-in with the Nutrition part of our Health curriculum. The presenter had fantastic cutting technique and, while the dish contained foods I don’t eat (like kale), it smelt great as he cooked it. After talking to those who tried it, I can report that his sautéed veggie combo over pasta and kale and bean salad was tasty.

Throughout his demonstration, he’d rubbed me the wrong way. It’s an unfortunate thing in human beings but as soon as I saw him he was instantly not one of my favourite people. There was an air or vibe about him that didn’t sit well with me at the off. Then he did his demo which, and and this is purely my opinion, was given arrogantly and condescendingly. He insisted that in every commercial cooking show the chefs use butter, especially when sautéing or searing shrimp. When he said that, my friend and I glanced at one another quizzically. I’ve watched plenty, and do watch plenty, of cooking shows and I can honestly all the searing and stir frying and sautéing is done with olive oil; mostly, with extra virgin olive oil (evoo) at that. But it wasn’t until he had his veggies in the pan and they were gently sizzling in olive oil did he make a horrendous blunder – a blunder that insulted me on a personal level as well as on a cooking one.

Here’s what he said: “And if you want to give it an Asian flavor, just add soy sauce and throw in some baby corn and broccoli florets.”

On a personal level, I’ll say this: Most stir fries that I’ve encountered in my life – I grew up in Hong Kong and travelled around Asia – are not just flavoured with soy sauce and have broccoli florets and baby corn. If anything, those are staples of Asian American cuisine found in takeout joints and geared to American/non-Asian palates. I can’t, honestly, recall a stir fry in Hong Kong that I’d eaten that had baby corn, broccoli florets, and sliced button mushrooms. On a cooking level, and also on  a personal level since I am an Asian home cook, I took offense in how he reduced Asian cuisine to soy sauce. Forget about the other aspects of Asian cooking for now. Since we’re taking about sauces what of patis (Filipino fish sauce), oyster sauce, red chili oils, sesame oils, peanut sauces and oils, bagoong (Filipino shrimp paste), Sriracha, just to name a few? Adding any of these to his sautéed veggies would’ve given it an Asian flavour, too. And of the non-sauce flavours, what of lemongrass, tamarind and, good old fashioned, ginger?  I can cook a stir fry without using soy sauce and it’ll be just as tasty – or differently tasty – and authentically Asian. Following his advice would be akin to simly adding tomato sauce and garlic if you wanted to make something Italian. But, wait, isn’t garlic also a large part of many South American cuisines, Spanish cooking and, oh my goodness, Filipino food. And, yes, Filipino food is a kind of Asian food.

I doubt that he meant to be ignorant and offensive and exhibit a kind of unintentional racism. I think he’s trying to promote something he believes in (healthy cooking and healthy eating for kids) while, at the same time, making a name for himself. I have nothing against either. I’ll completely in favour of self-promotion. Just be less ignorant about how you do it.

So, having said that, if you’re new to Asian food, whether  as a foodie or as a cook,  remember that there’s more to it than soy sauce. If  soy sauce was all there was to it, there’d be a billion bored eaters in this world and Asians, well, we’re not about boring.